One thing that has to be done before you even get to the room for your first radiation treatment is that you have to be scanned and marked.  I explain these marks as x marks the spot to my 5 year old son.  He knows the doctor isn't looking for gold, he does however feel more comfortable with the fact that they are there. 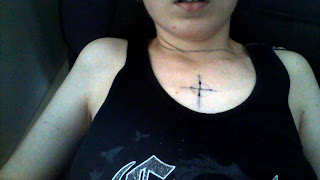 The first time I had to go to the simulator for marking and scans was the day I got my diagnosis of stage IV metastatic Melanoma.  We were all in a haze and had no idea what we were doing or where we even were in the hospital.  This time it was my third trip there and I felt like an old hand at it.  Funny what a year as a cancer patient makes seem normal.
The one thing that I have managed to notice every time that I go to the simulator waiting room is that the number of men is much larger then that of the women, patient wise anyway.  I realise that radiation is used more with prostate cancer but I guess I never realised the volume of prostate cancer patients at my cancer clinic.  Today in that simulation scan waiting area I was able to put a face to one of these prostate cancer patients.
His name is Abbey.  My guess at his age is about 55.  Looks healthy, much like people tell me I do, but inside he has stage V prostate cancer (with a rating of 9.3 for those of you that know anything about prostate cancer). I had been telling another man about wanting to get glaxal base for after the treatment for the area of the skin exposed to the radiation when he came up on the waiting area.  A few minutes later I got up, because after being at the hospital sitting from 10am until now 1:30pm my butt needed a break.
When I was looking at the postings on the tack board he came over and asked "what was that cream you were saying you should have to use after?"  I was hooked, I knew I had made a friend just because we were both in the same place at the same time, in similar circumstances.  Yes, we cancer patients make friends in strange ways I know, but now in the sea of faces I see every time I go to TBCC I will look for his.
So Abbey is new to the TBCC, but he has known something has been wrong for almost two years.  Two years of pain, urination issues, a urologist telling him that nothing is wrong (want to hit him with a shovel!), tests coming back normal, of wanting some one to listen to him instead of looking at the scientific facts.  Sometimes it is amazing how hard it is for a patient to be looked at for what they are, what they feel, and to get someone to really listen.  I hurt knowing that Abbey was one of these people.
"Nothings true and nothings right so let me be alone tonight"  if you can imagine a persons face saying that then you can see the expression I saw as Abbey was telling me his story.  He started having an issue went to get it taken care of.  He isn't a man afraid of a doctor, or to stubborn to go.  He knows how precious life is.  After suffering the loss of his own son and watching his father-in-law fight prostate cancer, he doesn't want to see his family suffer again so he tries to be proactive with his health.  In December of 2012 he started passing blood.
Any person sick with anything know peeing blood is a bad sign, but for him it meant they had to finally pay attention to what he had been saying all along.  He knew he was right about it being his prostate, but like anyone else we never really want to be right about what it is.  I remember feeling that way when I had to go in to get the results for my fine needle biopsy.  I knew it was going to say Melanoma when they called, I just didn't know it would be stage IV.
I then shared my story with Abbey and his wife.  He was shocked I had Melanoma, and asked if I got it from tanning beds.  I explained my story a bit more and did some fact plugging about using tanning beds.  He was shocked and said he use to use them when he was younger, but he will be sure he tells people the possibilities of what can happen.
I wish I could be there when he first goes into the room and sees this......

I wish I had of had someone like me to be there when I saw this machine the first time.  Don't get me wrong the radiation teams are great, and they tell you loads about what is going on and how things work.  It is just when someone who has been through it before it helps that much more to make you comfort able about what is happening.  We need a buddy system in the cancer clinics!  If we could do that I would take Abbey as my new buddy any day!!
I wished him all the luck in the world when I left and he was going into the simulator.  I told him about the treasure map, and he got a chuckle.  "At least it does lead them right to my jewels".  It is that attitude, that willingness to ask strangers questions, that knowing that he needs to make doctors listen to him that makes me know he is going to fight hard and long.  This part might not be easy or pretty or wanted, but he knows that it is necessary!
Abbey gave me a renewed boost of faith.  He showed me what I am sure I show people too.  This is not what all cancer patients look like, and it isn't what all of us want to be thought of as either.  We are people, with lives, families, stories, friends, faith, and reservations.  I am thankful to have met him and hope to see him on the other side of this fight.

Oh and Mr Dr Urologist man that thinks that old school is the only way and doesn't want to use new tests and technology to diagnose patients, or even listen to them when they know something is more then just wrong.  Well I just want you to know that I have a shovel with your name on it!
﻿